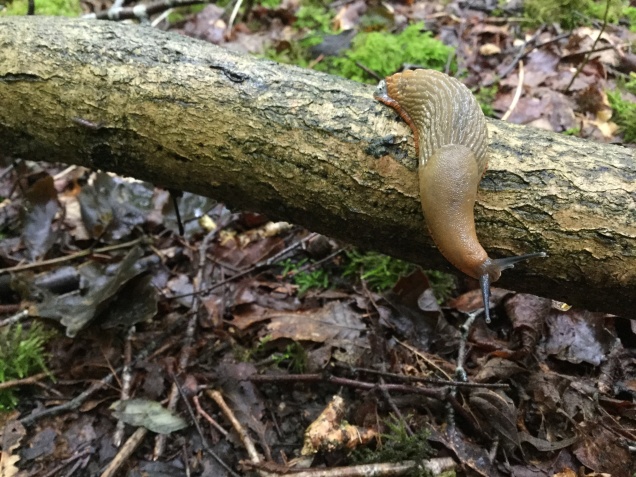 By far the most common creature I see in the wood is the slug. On a damp day, it’s hard to move around without standing on them, and when we camp, slugs climb the tent walls in the night. I have found slugs in the breakfast cereal box, in my shoes, pans, and wash bag. I have discovered them clinging to potatoes, nectarines and cartons of orange juice. I have to admit I find them a little off-putting.

One of my first memories is waiting excitedly for a snail to put out its eye stalk again so that I could stick out my pudgy finger to prod it and watch it retract, like a sock being pulled inside-out, toe-first. I remember being fascinated by the snail, by the beautiful shell it carried, and intrigued with its ability to retreat completely into its portable home. I have never felt the same about slugs, and it is no good telling myself they are just snails without shells.

Melody, on the other hand, loves slugs. If we have a slug in the tent or round the campfire that is in danger of being stood on, the shout goes up, ‘Slug rescue!’. Melody will zoom over and remove the slug to a safe distance. In the years we walked across the fields to the children’s (now closed down) primary school, Melody would pick up a slug each day on the way. She would proudly show her teacher the slug each morning as we went in to the classroom and I would see the teacher recoil as she told her to, “Pop it in the playground, dear… and wash your hands.”

The slug isn’t much loved; even its name sounds displeasing as it is spoken. But as with many species that have a negative image, they really don’t deserve it. Slugs are hugely important both as a food source and as a consumer of rotting vegetation; they are also °simply interesting in their own right.

If we are going to talk about slugs, it is probably important to understand that the name slug does not refer to a related group of animals such as we might say ‘horses’ or ‘mice’. The slug is a mollusc (a group including the snails, octopuses, squids and clams); instead of defining a natural group within the molluscs, the word slug refers to the shape of a mollusc with no (or almost no) shell. This means that some slugs are more closely related to certain snails than each other, and that the slug shape has evolved several times from different ancestors.

Fun facts about slugs range from the fact they have blue blood (their blood contains the copper based haemocyanin as opposed to the iron based haemoglobin of mammal blood, hence appears blue when oxygenated instead of red) to the gruesome detail that they defecate from the head end, very close to the hole they breath from (a throwback to their snail ancestors who rotated their anatomy so they didn’t end up with faeces in their shell).

Slugs are most likely to be seen from April to October, but are out and about whenever the weather is damp and above 5°C. If it is too cold or dry for them above ground, they will retreat deep into the soil and it is thought that up to 95% of slugs are underground at any one time. They are very like snails, having the muscular foot to propel them forward using rhythmic waves of muscle contraction, and like snails they make a mucus over which they move. The mucus both reduces damage to the foot and reduces friction so saving energy; however there is a trade off as water is lost in the mucus and it is this which restricts the slugs activity to cool wet days and night to prevent the slug desiccating. Instead of a shell, most slugs have a horny plate concealed beneath a mantle or saddle at the front of the slug, though there is one genus that has a small plate like shell on its back end, way too small for the slug to retreat into. The mantle has a hole in it (almost always on the right) called the pneumostome and it is this the slug breaths through. On the slug’s head there are two pairs of retractable tentacles. The upper, optic tentacles, have light sensitive eyespots on the end – they can be regrown if lost, can move independently and can also be used to smell. The lower tentacles are shorter and are the tentacles that are put out first – they are used to touch and taste.

As I sit in the wood waiting for the badgers, sometimes I hear faint rasping noises coming from the leaf litter – it took me a while to realise I was hearing the slugs eating. Their mouthparts are found under their tentacles and they eat using a tongue like organ called a radula. It is covered in thousands of little protrusions (denticles) which act like tiny teeth. The sound I hear is the radula scraping over whatever the slug is eating – it acts like sandpaper, rubbing food off a surface and into the slug’s mouth.

Slugs are hermaphrodite, though there need to be two slugs involved to produce eggs. The eggs can last for years, lying dormant until conditions for hatching are favourable. Once hatched, a slug takes a year to reach full size, and usually lives around two years after this, though they can live considerably longer. They are eaten by a wide range of species including hedgehogs, foxes, badgers, birds, slow worms, violet ground beetles, Devil’s coach horses, frogs and toads. Interestingly, hedgehogs have been seen to wipe the slime off slugs with their paws before eating them. Slugs themselves eat decaying matter and plant debris, plant leaves and stems (particularly, it seems, in the garden), roots and fungi, fulfilling a valuable role ecologically as they clear up the rotting vegetation in the environment. And slugs are able to colonise a wider area than snails as they do not need to be near a source of calcium for shell growth.

The main species of slug we find in the wood is the large black slug Arion ater. Despite its name, its colour can range from jet black to orange. Curiously, if they become irritated, they will rock from side to side and it isn’t unusual to come across one which has contracted and is bopping around as if it is listening to music on little sluggy headphones. So, slugs even show their feelings.

I don’t think I will ever be able to carry slugs around with me as Melody does, or not need to beat down the ‘eww’ feeling as I nearly bite down on a slug instead of my lovely, sun-ripened nectarine. However, taking a closer look at these molluscs does give another perspective – slugs really are super when I take the time to find out about them.