Apart from footprints and droppings, there are many other signs which give away who has been out and about in the woods.

Badgers use trees around the sett to sharpen their claws, but they can also use rocks.  Here, a rock has been used by badgers for scratching.  The claw marks are parallel and show 4 or 5 marks in a set. 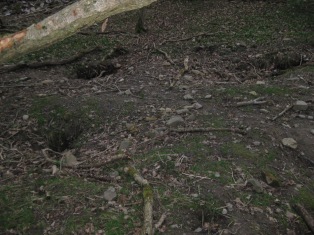 Here is part of our main badger sett.  Entrances are usually around 30cm across and often have large spoil heaps associated with them, as they have been in use a long time.  The main sett will have a number of entrances, some which will be in use and some not.  Loose soil and dragged out bedding will show which entrances are in use, and often it is possible to see badger footprints in the soil outside the sett.  Our sett is also surrounded by badger latrines.

This badger skull was found in a spoil heap of a satellite sett undergoing a spring clean. Note the pronounced sagittal crest (bony ridge) along the top of the skull, something diagnostic of a badger skull.  Strong muscles attach from this crest, down to the lower jaw.  Badger leg and rib bones were also found in the heap (you can see a leg bone in the bottom left of the spoil heap).

The wood is also full of badger paths – they could have been made by people or deer, but for the fact that whoever has made them is able to pass under the obstacles rather than go over or round them.  In our wood, it is the badger. 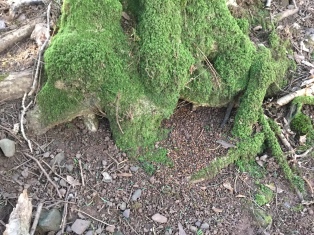 Beneath a yew tree, in a sheltered nook been it’s roots, we found a large pile of eaten yew seeds.  This is indicative of a small mammal bringing the seeds to this place to eat.  In our woods, this would either be a wood mouse or a bank vole.

Here a large patch of ground (75cm by 50cm) has been scraped clear. Up close, you can see a collection of coarse white hairs spread around the scrape, quite a number of which are snapped. This is a sign of Roe deer in our wood. The clearing is where a deer has lain down to sleep, scraping down to the bare earth before settling. Deer hair is brittle and snaps easily – here it has probably broken as the deer’s coat rubbed up against the ground.