Following on from my post showing some of the badger photographs taken by our camera-trap, this week’s post is a selection of photographs of other visitors we have caught with the lens.

The deer are the biggest mammals we have in the wood.  We have both roe and red, the red being the larger of the two species reaching up to 1.4m in height.

Although the roe deer also have red brown coats in the summer, they are more delicate than red deer, and have a white rump.  They can grow to around 0.75m in height.

Earlier in the year, when it was dry and there was no natural water source, we regularly put water out for the badgers in an old cooking pot we found in the wood.  Each time we came back we found it empty.  It was only when we put the camera-trap on it that we realised it was not the badgers emptying the water – they did not appear once on the photographs!

This year a family of foxes has been using an unoccupied badger sett in the wood as their den, though a few days after these photographs were taken they were ousted by the returning badgers as they spread out from the main sett.  The foxes are still about though.

The hare is always a special sight in the wood – a good photo to end on. I’m always surprised by the length of those back legs! 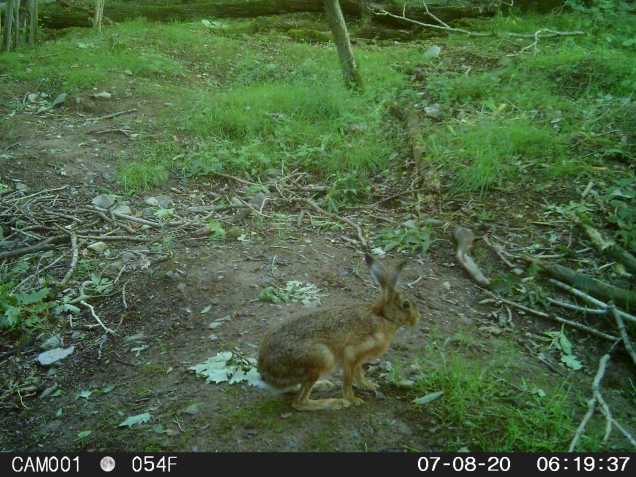 I hope this gives an idea of what you will see if you sit quietly in the wood for long enough.  Often when badger watching we see one of the other occupants of the wood quietly passing through.  Although the wood appears empty at first, it is bursting with life if you know where to look…