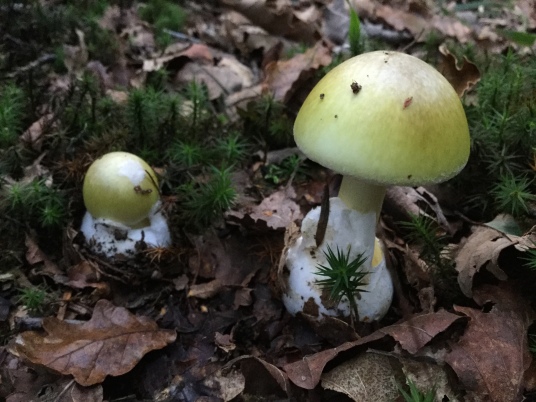 Things aren’t going to plan at the moment. It’s one of those times when it’s hard to sit down to write; hard to do anything really. Faced with dead-end after dead-end, a crushing pointlessness as each attempt to move life forward seems blocked, the anger and frustration of impotence boils below everything. But because I don’t know what else to do, I force myself to sit and write about something that doesn’t involve any emotional input. I look again to nature to take my mind off things. I need another dimension, a world I can’t see, somewhere cynicism and tarnish haven’t reached. I remember Melody’s joke – Why was the mushroom invited to the party? Because he was a fun guy… I smile. Perhaps these ‘fun guys’ can cheer me up.

Mushrooms are everywhere in the wood at the moment. Amos found some really great ones the other day. He called them high-vis mushrooms because of their almost glowing, yellow-green colour; the recently erupted ones had not burst out of their casing so they looked like little white snowmen. Very cool – except that they were death caps, the most toxic mushrooms in the UK… cool, so long as you remember not to eat them.

Regardless of toxicity, there is something about mushrooms, something magical. They can appear overnight, disappear almost as quickly; they are quirky, structurally architectural, colourful. When they are fresh and perfect, they beg to be touched, picked, examined. They carry a hint of mystery, folklore, fairy dust. But just as fascinating to me is what I don’t see. The mushroom isn’t the whole story – in fact it’s really only the end of the story, and only a fraction of the organism itself. Lurking beneath the woodland floor, these entities feed, infiltrating the very ground itself, potentially growing at breath-taking rates. Usually invisible to the human eye, the fungi may exist for years undetected, digesting away their surroundings. Only when the conditions are perfect do these entities produce their fruiting bodies, the mushrooms, so alerting us to the fungi’s existence, alerting me to the presence beneath my feet.

We are used to seeing many kinds of fungi in daily life, from bread mould to brewer’s yeast, antibiotics to athlete’s foot. The fungi that produce mushrooms are part of this group; they are referred to as macro-fungi because of their conspicuous fruiting bodies. Fungi are not able to take energy from the sun as plants do; instead they feed on other organisms and their waste. This is where the story of the mushroom really begins. The mushroom’s fungal body is an extensive web of threadlike filaments weaving through the environment in which it finds itself. These threads or hyphae secrete digestive enzymes, breaking down whatever the fungus is moving through at the time, be it a fallen log, dead animal or leaf litter. The hyphae then absorb the digested organic matter, leaving the area surrounding it depleted of nutrients. The hyphae literally eats itself out of house and home, but is brilliantly adapted to cope with this. Hyphae grow only by elongating at the tip or branching some way back from it – as the fungus digests its way through its food source, it simply ploughs on into a fresh supply. Growth rates of the filaments can be phenomenal, up to a kilometre of new hyphae can be produced in a single day. Imagine that – creeping white fingers, relentlessly digesting, penetrating, expanding, all beneath my feet, unseen… it’s the stuff of horror films.

And so to the mushroom itself. A fungus needs a way to move to new places – eventually all the nutrients in a fallen log or beneath a tree will be consumed, and, evolutionarily speaking, the fungi needs to spread its genes. It does this using spores, roughly the equivalent of  seeds in plants  From time to time, the hyphae of a fungus will come across hyphae from another individual of the same species. Mushrooms are the result of this meeting, structures which allo the spores to develop and be released into the environment. And wow, can they do this is style. A single average-sized mushroom you buy in the shop can contain 16 billion spores – fungal spores that are so light, they can be carried for thousands of miles. It’s not surprising that they occur everywhere in our environment.

But mushrooms only appear when specific levels of moisture, temperature, light and carbon dioxide occur in combination. How does a fungus make sure it meets another individual at the same time as the conditions are right so that it can produce a mushroom, reproduce and so create spores? The answer is, it doesn’t. Instead, if two compatible fungi meet, they don’t reproduce but instead share cells. In each cell, there is a copy of the genetic information of both individuals (in technical terms each cell has two nuclei, making it dikaryotic) until such time as reproduction is possible by the development of a fruiting body, the mushroom. So not only are there huge unseen giants beneath my feet, when I stand in the wood, I could be standing on a metaphorically double headed being, growing silently as it waits perhaps years for the right conditions to reproduce. And when conditions are favourable, seemly from nowhere, huge colonies of mushrooms can grow overnight. Whole fairy villages pop into existence, winding ledged staircases appear on the trees, fairy rings spin circles in the clearings. Magic.

I feel better for looking at the fungi – fun guys, yes, and interesting too. What I haven’t mentioned is the fact that they are essential to life. They are the great decomposers. Fungi break down the corpses of dead organisms (anything that was once living) and are critical to the recycling of carbon and other minerals that would otherwise be locked away. Plants rely on them to break down leaf litter and dead wood, ensuring a layer of fertile soil. The macro-fungi have a huge role in this; it is no exaggeration to say that without them and other types of fungi, life for plants and hence animals would not be possible in the way we know it.

So when I see a mushroom in the wood, I see the beauty, but I am also reminded of the presence beneath the ground; the silent giant that supports life – unseen, relentless … and absolutely fascinating.