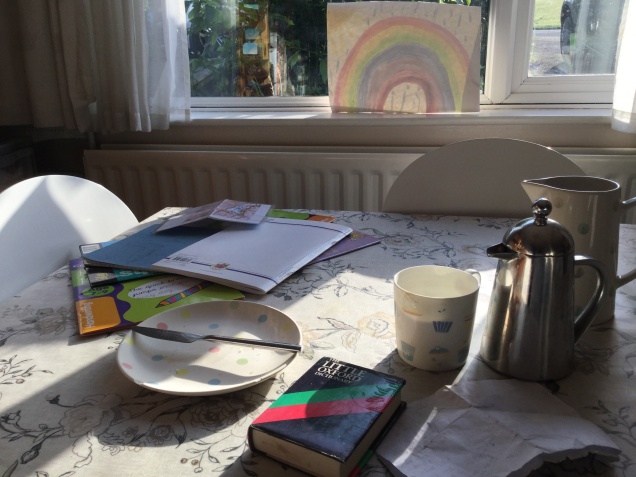 It’s five o’clock in the morning. I am sitting at the kitchen table shoving crumbs and the debris of children’s school work out of the way. I, and the daylight, have been up for hours. My coffee cup steams on the table, the page in front of me is blank. I wrote a post yesterday – a good one, actually, I thought. It was to say goodbye, to finish the blog, to put an end to the weekly writing. I was going to load it up on my feed today, draw a line under that ‘phase’ of my life.

All the extra responsibilities these Covid-days bring are making it so much harder to find the time to write. It’s harder to find the joy to write with. I am proud of some of the words I have written on this site, and the thought that the blog might drift into a decline and become less than it was, makes me sad. I thought if I finished now, that would be tidier.

I went to bed early last night and set my alarm. Today I’d be up at seven, a fresh start, have the children up and learning with enthusiasm before ten. I’d have my mind on the job, no thoughts about what I would be writing this week. Who needs writing, right? It’s not as if I’m any good at it anyway as my umpteenth rejection, arriving last week, testifies.

Instead of the night’s sleep I had hoped for, I was woken before two. I lay in bed churning, gave up on sleep at five. And here I am.

Hundreds of worries kept me awake, all of them real but unsolvable, the same worries that have been there for years now. From the number of times I have run round them in my head, you would think I’d have worn track marks in my brain; perhaps I have neurologically speaking. But I did realise one thing – I don’t think writing is something I can just turn off. I thought about how I’d been for a walk in the wood with the children yesterday afternoon. I didn’t take my notebook with me as I had ‘finished’ with the blog, but instead I came home with a sheet of notes scribbled on the back of the only piece of paper I had in my coat pocket – a tatty old note from Melody’s school telling me she had ‘sustained a ‘bump’ to her head’ (I have loads of those). Despite having nothing to write for, I had still written notes. What was that all about? Just a habit of the last couple of years I told myself, but then things began to creep into my mind. The nature writing competition I entered at University, an essay full of hormones and the demand we care for the planet; I hope someone had the kindness to shred that entry. The old secondary school magazine I found a few months ago; flicking through I’d been surprised that quite a few of the articles had been written by me. I thought about the ‘Brambly Hedge’ exercise book full of cringe worthy Doctor Who scripts I’d written in primary school – it’s up in the loft with a series of books on animals I had written with the boy over the back wall of my house in Liverpool. I remembered an incident in class where my infant teacher, Mrs Williams, had caught me doing something under the desk during quiet play. She’d stopped the class and asked me to show what I was up to. I remember now, showing my guilty secret and I also remember not quite understanding the look on my teachers face when she told me that it was okay to write stories in free time. I still remember the story – it was about a squirrel. Instance after instance, story after essay came sneaking back. So not just a phase then – who’d have thought it?

So if I am going to end up doing the writing anyway, I might as well post what I’ve written, if only for practise. There may be days when I am unable to get the blog written, I may have to stop posting with such regularity. With fewer opportunities to go to the wood or do research, posts may be a bit ‘off-topic’ but it seems that stopping altogether would be a rather pointless exercise given the words will still romp round my head, thudding about, demanding to be written down. For so many of us, the future is so unsure, so undefinable, so completely unpredictable at the moment. Holding onto something familiar and friendly seems to be the way to go right now – so I will carry on with the words and see where it takes me. I hope you are all well and bearing up through these strange times. Thank you for reading, ‘liking’ or commenting on the blog – I appreciate people’s words. I hope to carry on over the next few months, and hopefully, by then, things will be clearer for everyone. Meanwhile, the wood will move onwards through its seasons, steadfast and totally reliable; and in that, I take comfort.