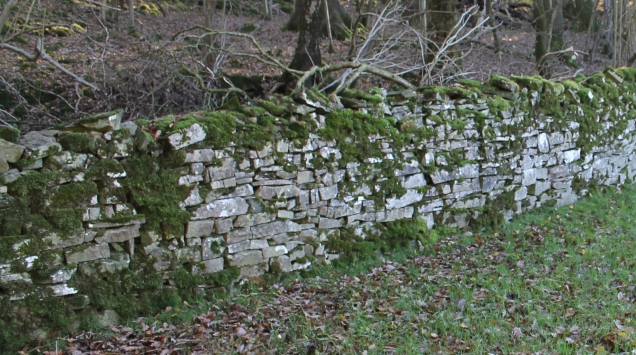 Our wood came as a single packet, but it hasn’t always been that way. If you walk through the trees, it won’t be long before you come upon a green-mossed wall snaking incongruously between the trunks. Some of the walls are tumbled down, a jumble of limestone, fern and bryophyte; some are gappy, stone robbed away in the spaces so effectively you would hardly have known a wall once existed there. Some walls stand taller than me, beautifully constructed and as perfect as if they had been built yesterday, but completely useless as the wall either side has been knocked down by falling trees. Some of the walls are waist high, some act as the boundary of small, circular enclosures. But all were built, all were put there stone by stone, painstakingly created.

I went on a walling course in the summer. Only a day, but I helped both take down a tiny part of a falling wall, and rebuild it to just above knee height. There were about twenty of us – admittedly most of us were learning, but the effort that went into building that wall was immense. A few of the people were experts – it was incredible to watch them, their instinct for knowing where a particular stone would fit was remarkable – but even they would admit that building walls is not quick work. It’s an art, a creation of two outer skins held together with rocks that span an inner core made of smaller filler stones. These dry stone walls are not just thrown together, they have been coaxed into existence, built in such a way as to flex with the land around them, shift and resettle in the wind and rains, and stand for centuries. The people who built them knew what they were doing, spent a long time at the wall itself, expended thought and energy placing each stone. It seems immense when you think about it. And I wonder about the walls in our wood. Who built them? What is their history?

Reflecting the land’s development, the walls divide the wood into four distinct parts. Two partitions are named after the men who planted, or ‘improved’ by planting, the woodland within. One is named after the man who cleared the original field the woodland then partially reclaimed. The last partition has an Old Norse name, the name itself suggesting land that had already been enclosed; this area is thought to be a surviving relic of primeval woodland. Although the first written record of this land’s occupation by Norse Settlers is in the 1100’s, hints of their arrival can be found as early as the start of the 900’s. How far do our walls go back? Certainly, walls in the valleys around are attributed to these early settlers. How many times have our walls been rebuilt? Do some of the foundation stones date back to the Vikings? It’s intriguing to think of it. Every stone has been placed in the wall by someone. If only the walls could talk. I asked one of the experienced wall builders on the walling course if he had ever found anything amazing at the bottom of a wall he had taken down. He looked at me strangely, then said, ‘A tooaad?’ Perhaps it was an odd question, but I had heard of names found cut into foundation stones of walls, old clay pipes and bottles tucked away into the wall bases. It would be so exciting to find something like that in the walls we are beginning to repair in the wood.

Suddenly our walls are no longer just walls. They have a story. In some places there are lintelled holes for badgers to pass through, and at two corners where the angle of the boundary wall juts into the wood, we have found rabbit traps – zig zagged tunnels towards which rabbits were funnelled, their hope of escape through the entrances thwarted by a hessian sack at the other end. There are places where cart sized sections of the wall have been removed and rebuilt, probably repeatedly, as charcoal burners moved in for a season, then continued on their circuit not returning until fourteen years later. But even more than this, the walls stand as a reminder of the people who built them. Maybe I will find out more about these people – I hope so. Their walls have stood many years. I’ll need a lot more practice, but maybe the walls we repair will last. It’s an odd thought, yet a satisfying one. Maybe I will be able to put a little back; a small contribution of gratitude in return for what we have gained from the landscape.

2 thoughts on “If our walls could talk…”