After six days of almost continuous rain, I could not waste a day of sun. With too much to do already, I threw caution to the wind and went to the woods. As I walked, the wood had an upbeat feel, sunlight reaching through the bare branches to the floor, painting the leaves on the ground with a glowing copper warmth. I was glad to be out again, glad of the respite from the ‘to-do’ list.

When I talk and write about the wood, I am often guilty of lumping it into a single place, but it is far more than that. The wood has so many different faces, each turn of the path moving through atmospheres created by the trees themselves. There are spaces of thick trunked oak, stout branches reaching high to a lofty canopy, clear ground beneath. Deer rest here and the floor can be thick with bracken, huge brown mushrooms or bluebells depending on the time of year. Faeries would not be out of place here, badgers forage in the trees shelter and the hare lollops through the dells. This woodland feels open and bright. Then there are the parts filled with narrow waisted hazel and silver birch. The canopy is lower here, it is harder to see through, less airy and in the winter, the white and silver trunks look like bleached skeletons in the sun. Their aspect is more confused; branches, trunks and stems criss-cross in front of each other and there is no clear way through. In the summer, leaves cover everywhere, light is scavenged and swallowed by the hungry greenery. This wood is denser, more riotous, excellent for den building and hiding in. There are areas of lush fern, limestone surrounded clearings, recently planted woodland, truly ancient woodland, areas of wide, open-grown trees and places where the tall trees have grown as rapidly as possible to reach the light in a crowded space. Each of these different parts has a character, a feeling, an identity. But at this time of the year, when most of the trees have lost their leaves and the winter sun shines, it is perhaps the yew groves that really draw my attention. In our woods, there are several places were yew trees have gathered to stand sentinel over limestone pavement. The trees are so densely branched and leaved that light barely reaches beneath them; today, when the suns light is making it through to most of the woodland floor, it is the dark of these groves that draw my eye.

The Common/English Yew (Taxus baccata) is native to Europe. It has male and female plants, both flowering in March and April. The female tree bears the seed, held in the characteristic red fleshy cup called the aril, (it is not technically a berry because the seed is not enclosed, only surrounded, by the red flesh). The avil of the yew is the only part of the tree that is not poisonous; the word toxic is derived from the tree’s Latin name Taxus. The wood is hard and durable, and has traditionally been used in the production of longbows. Individual trees can live for thousands of years; the oldest living organism in Europe is reputedly a yew growing in Perthshire, widely believed to be at least 4000 years old. 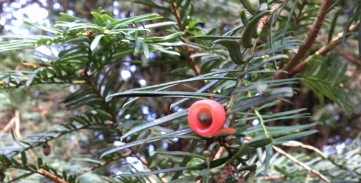 I like yew trees; they drip with mystery, ancient tradition, myth and legend. The yew has been seen as a sacred tree for centuries; Druids favoured them as the place for their ritual ceremonies and later, Christianity took this significant tree as a symbol of eternal life – yew can regenerate, re-rooting where branches touch the soil, or by putting out new growth to fill its own hollow trunk. In Britain we have many yews known by name; yews that have seen battles, marked sacred places, provided a home, sheltered secret meetings. Darwin walked beneath them each day as he walked his ‘thinking path’, Wordsworth wrote poems about them, yew even creeps into children’s literature: Carrie ran through a yew grove without stopping each time she visited Druid’s Bottom (Carrie’s War by Nina Bowden) and JK Rowling’s evil wizard Voldermort brandishes a wand made of yew. Yew trees clearly have a presence that makes an impact, a tradition that goes back centuries. And because of the yew’s longevity, we can physically interact with these trees; we can stand in the groves used by druids many centuries ago, walk under the actual trees that Darwin trod beneath, stand by the tree that watched as King John was forced to sign the Magna Carta.

I don’t know how old the yew trees in our woods are, but some are big, and I would like to think they had seen our Vikings. Regardless, there is something special about our yews – they have a definite character not found anywhere else in the wood and they were yet another thing that drew me to the wood at our first encounter. I can understand why Carrie and her brother Nick would find a grove of yews an unnerving place to be, with the light obscured, low long branches stretching from trunks, the earth below devoid of undergrowth. But I have walked beneath our yews, watching as a family of badgers came almost up to my boots, oblivious in their snuffling search for tasty grubs. I have seen the birds nest in the thick foliage, held my heart in my mouth as my children climbed the easy footholds to the tops of these trees. The yew brings a rich colour to the wood, a dark velvety green of the leaves dotted with vibrant bursts of a delicate red, both against a background of twisting bark in a deep rusty brown. Some times it is eerie beneath the yews, but not often. It is at this time of year that the gnarly old yews of our wood show their ancient character most, and I for one, like it.