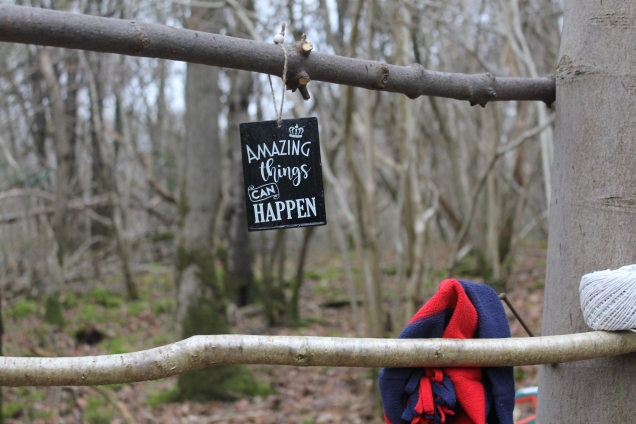 The walk up through the woods towards base camp is more familiar and worn than it was on our first visit, yet it has lost none of its excitement.  As I get closer , searching for wildlife in the trees, listening for sounds of the animals who live in the woods, the feeling of anticipation always bubbles up inside me.  It’s partly a feeling of discovery; what will unfold today?  But it is also a feeling of pure enjoyment.  I simply enjoy being in the woods.

As soon as we owned the woods, our visits became very regular, and with life at home detonating around us, the woods became our sanctuary; a place we came for respite.  I held close every precious minute we spent there together in the knowledge that our family as we knew it may be on borrowed time.  The possibility that Joe may have to live away from us ripped my heart out, so in order to survive, I resolved to get down to practicalities, block out what was happening as much as I was able.  We would go to our woods, make memories and vent frustration through action.

Base camp began to expand.  We had 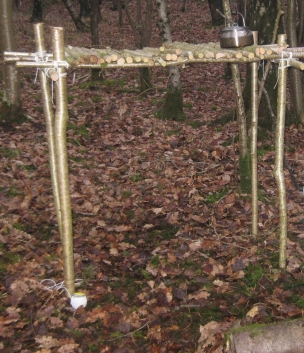 found our little store undisturbed on our return after the first visit, and we added a table Girl Guide style, made out of branches and string, along with some coat hooks and a bag rack.  Joe explored the trees, while Peta, Melody and Amos had hours of fun with a new game called “Cannon ball” which seemed mainly to consist of firing each other off the end of the seesaw.  But being a mother of four, I could see that one practicality needed sorting our pretty quickly, and that was the toilet facilities.  With six of us hanging out at base camp regularly, it wasn’t going to be practical to keep digging holes.  And what if we had guests?

I spent a lot of time researching.  I was amazed at the wealth of information and conflicting advice that can be found about dealing with human waste ‘off grid’.  I asked around other people I met who might have similar issues and realised that individuals have very strong – and conflicting – opinions on how this matter should be dealt with.  I eventually settled for a system outlined by Joseph Jenkins in his book ‘The Humanure Handbook’.  If you are interested in this topic, Joseph Jenkins has made his book freely available to download as pdf’s at weblife.org/humanure, and the book really did made me think about how we deal with our own toilet waste.  We use clean, treated water to flush our toilets,  use chemicals to treat the waste.  We spend so much money on movement of waste, drain maintenance and treatment plants.  It seems crazy when I think about it, there is definitely a better way…

At the wood, our contribution to recycling our own toilet material, (not toilet waste – in three years time this will valuable compost), started out as a bucket with a toilet seat, and a second bucket of sawdust.  It’s easy.  Prime the toilet bucket with sawdust, then anything that is visible in the bucket after a toilet visit just gets covered with more sawdust.  Once full, we empty the toilet bucket in a compost area which is not accessible to animals.  We are using a garden composter bin at the moment, (that was another interesting sight to passers by; a green plastic Darlek with two human feet lurching across the field accompanied by excited children yelling directions).  If the compost becomes thermophilic (hot compost), which it can if the heap is big enough, the pathogens (nasties) in it will be dead in two years and the compost safe to use.  If not, (and realistically I am not at a place in my life where I can regularly check my compost with a thermometer), as long as the compost is left for three years, just the normal low temperature compost heap does the trick and produces safe compost.

So with our toilet issues sufficiently resolved, and the addition of a toilet tent for privacy, I would like to just touch on another toilet issue which I would never have considered before I regularly frequented a woodland…

In my need to get some headspace, as I said before, I would dash to the woods in the three hours between dropping Amos off at nursery, and picking him up.  I dread being late to pick up any of my children, but being late to pick up Amos, already in a very fragile state, would have cause him huge distress.  Because I didn’t know the wood well, I left stick markers as I explored so I didn’t get lost and so I could be sure I would make it back out of the wood on time.  The first day I laid sticks.  The second day I came back to find them moved out of the way.  I pushed them into the ground.  On my third visit, all the sticks had been knocked over – I built them into wigwams.  On my fourth visit, the sticks were gone and instead there was a pit, full of badger poo.

This is pretty much routine now.  I left some tea bags on the ground one day and when I went back to pick them up…well, I won’t be using them to make tea.  If we try to plant native flowers, we assume over half of them will end up rooted out and pooed all over.  Where ever we work, the badgers come and remind us who’s boss, but last week the badgers surpassed themselves.  I went down to empty the compost to find that, in less than two weeks, the badgers had turned the ground around our toilet compost pile into a massive badger latrine.  I have visions of the badgers, hiding behind the trees, sniggering as they watch me run the gauntlet of the toilet challenge to empty my brimming bucket.

On a serious note though, I am grateful to the badgers.  They are reminding us not to take all this for granted, to be mindful of our place in this wood.  Though we are the custodians here, this wood is the badgers home.  We talk as a family of ‘our’ wood, but we have to be aware that our wood truly belongs to the nature within it.

2 thoughts on “Toilets of man and badger”